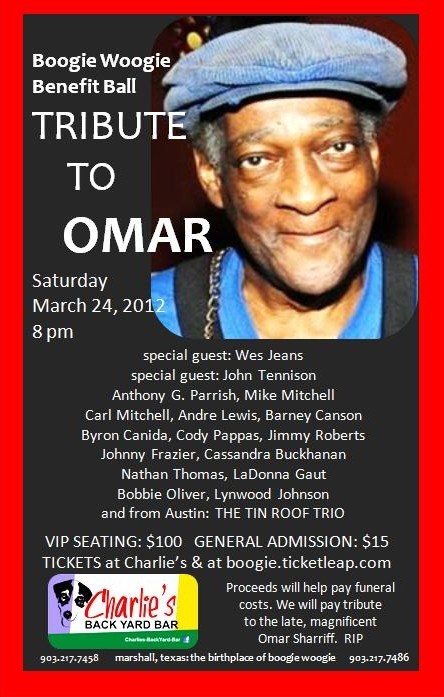 A Letter from Jack Canson About

Boogie Woogie is all about having fun. This Saturday night you can have a lot of fun and help show the rest of the world that Marshall, Texas is a great town with a big heart.

The late Omar Sharriff was a self-taught master of his instrument.  In 1977, when he was performing as Dave Alexander, Keyboard Magazine ranked him the second best Blues piano player on earth, second only to Ray Charles!   Although he never enjoyed the widespread fame and financial success he deserved, throughout his career he was recognized by music critics and astute followers of blues and Boogie Woogie around the world as an “overlooked genius” and one of the all-time greats.  He never got a bad review.  Not once.

Omar was an interesting and complex man who was totally immersed in his art. When extraordinarily gifted people are so intensely focused on the creative world their minds inhabit, it can sometimes make them difficult for others, and cause difficulties for themselves.  Such was the case with Omar.

Omar, who grew up in Marshall as David Alexander Elam, had many problems when he was discovered living in difficult circumstances in Sacramento, California by musicologist, medical doctor, and Boogie Woogie piano man John Tennison.   He had been unable to perform for some time and was in constant pain from coronary and circulatory problems compounded by decades of hard living.  When Omar was brought to Marshall for the Boogie Woogie Homecoming concert in June of 2010, it was the first time he had played before a large audience since performing at the 2007 Chicago Blues Fest. Most of his fans throughout the world thought that he had died.

Omar created a local sensation with his masterful performance at the Homecoming concert.  He returned that December for another triumph when he shared the stage with the legendary Bob Seeley and Chuck Berry’s piano player, Bob Baldori at the 2010 Boogie Woogie Christmas Concert.  In February of 2011, Omar accepted an offer to return to Marshall as artist-in-residence.  Here he performed for free on numerous occasions. He entertained seniors at Extra Steps, school children on field trips, at the Fall Festival, and on Second Saturdays.  He performed for the Faux Paws dog Walk, the Relay for Life, at Josey Reunion Round-Up, the Fireant Festival, and numerous charity events. Omar donated his services to help raise approximately $8,000 for Marshall’s Main Street Program at the first Annual Boogie Woogie Benefit Ball. He never turned down a request to perform and he never insisted on being paid.

Along the way, the story of Omar’s return to the hometown he had left in 1955 attracted major national and international attention.  He was recognized as the last living link to the generations who created Boogie Woogie music in the Marshall area by the Texas Historical Commission, the State Historian, National Public Radio, the Dallas Morning News, and other publications.  Omar gave much to Marshall with his frequent performances and the numerous television and newspaper stories that recognized Marshall as a city with a unique and admirable music heritage.  His presence here, and his music, helped jump start the many activities that are making our town a hub of live entertainment.

Unfortunately, in spite of excellent medical care provided by area specialists, Omar’s coronary and circulatory problems worsened and he was never free of agonizing pain in his legs. A two week tour of France, bookings in New Orleans, and a new recording session had to be cancelled.  In the last weeks of his life, he confided in friends in California, and to me, that he thought what the people of Marshall had done for him was a “miracle.”  He felt he had come home to a town that loved him.  He knew that his artistic genius was appreciated at last by everyday people, not just the cognoscenti.

No one can ever know all that is in the mind and heart of a person who chooses to end his own life. But I know beyond any doubt that the last year of Omar’s life was made better, and the attention of the world to his musical genius was reignited, by the “welcome home” he was given by the people of Marshall.

Omar died penniless, as most Blues and Boogie Woogie musicians of his and earlier eras did.  But because of his greatness, and all he had given to Marshall, his friends could not abide the thought of a pauper’s grave for Omar.  A funeral celebrating his life was held January 14th at the Marshall Convention Center.  Sullivan’s Funeral Home generously donated graveside services and a prominent burial site in Algoma Cemetery North.  People’s Funeral Home provided first-class services at steep discounts.  Musicians performed for free.  Bandstand Music provided sound at no cost.

Still, a substantial debt remains and additional funds are needed for a tombstone.

Saturday, March 24th, we are presenting a Boogie Woogie Tribute to Omar at Charlie’s Back Yard Bar in Marshall.  This event is a benefit to help pay these expenses.

We promise that all who attend will enjoy one of the most spectacular shows ever.  This tribute will be covered by journalists representing major media and it will be recorded in multicam HD video. A one hour program combining this Tribute Concert with the excellent recordings of Omar performing at the Homecoming Concert will be distributed free to broadcast TV, cable, & satellite services worldwide. This program will tell the story of Marshall, Texas the Birthplace of Boogie Woogie as nothing else can.

Even in death Omar will be giving to Marshall.  Now we want to give back to Omar.

You can help pay Omar’s funeral expenses by purchasing VIP tickets at $100 each, and receive All Access privileges, which include the upstairs private cash bar at Charlie’s and  complimentary appetizers. You can also help by buying General admission tickets at $15 each. It will be a great show, no matter what ticket you buy!

Tickets are available at 903.217.7486, at Charlie’s Back Yard, and at www.boogie.ticketleap.com.  We will be happy to deliver tickets on request.  We recommend you buy them now.  VIP seating is limited. And all our Boogie Woogie concerts in the past have sold out!

Take a look at the amazing line up of talent that will perform at the Tribute to Omar and give us a call or email – or go to the www.boogie.ticketleap.com web site for easy purchase.  We will also appreciate any donations to help us retire the debt and pay for a tombstone.  Contributions may be made at the website or by check to BOOGIE WOOGIE MARSHALL and mailed to 3109 Victory Drive, Marshall, TX 75672.

3 Responses to TRIBUTE TO OMAR – tickets on sale now